On 19 September 2022 the IPM Decisions Platform will be launched: an open access ‘one-stop shop’ for decision support in Integrated Pest Management (IPM): WWW.PLATFORM.IPMDECISIONS.NET.

On 19 September 2022 the IPM Decisions Platform will be launched: an open access ‘one-stop shop’ for decision support in Integrated Pest Management (IPM): www.platform.ipmdecisions.net  After an easy and quick registration process to set up a farm location and selection relevant Decision Support Systems (DSS), users have direct access to information and guidance on a growing number of pests on their crops.

At launch, the IPM Decisions Platform offers DSS output supporting management of 11 invertebrate pests and diseases. Many more DSS will become available before the 2023 growing season.

Available DSS on 19th of September:

The BYDV DSS was run on 25 October 2021 for a winter wheat crop in the UK that emerged mid October 2021 and had received no insecticide treatments. The output (Figure 1) shows a medium risk of spread of BYDV in the crop by the end of the week. As temperatures are increasing the likelihood of winged aphids being present, which spread the virus, is increasing. When the risk moves from medium risk (yellow) to high risk (red), crops should be monitored to assess the actual abundance of aphids in the field. This model is based on the Agriculture and Horticulture Development Board (AHDB) ‘TSUM’ model developed in the UK (https://ahdb.org.uk/bydv). 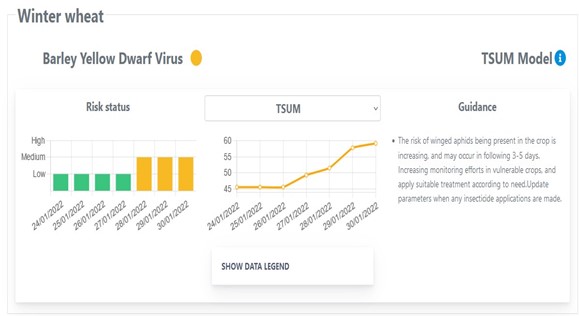